The TAB (Totalizer Agency Board) building by architect Geoffrey Pie connects function and form in a classic modernist manner unlike anything else in the Yland district. Signs, billboards and walls writ large with text and image are the norm here, this environment is an  ode to the idea of the tableau, of surfaces that actively engage the passing viewer with content, reducing the spaces between messages to a blur.

I’d always resented the involuntary attention drawn out of me at every step by street signage, gone the intelligent glance or abstracted stare, enter a polarized experience of the referential sign relegating everything else to impenetrable reality.

This experience of walking around with a head full of catchphrases has made me more analytical towards such signage and its part in my environment.  Opposition changes to difference and a more permeable kinship of billboard and sky.

All week we’ve been thinking In terms of screens. A conversation we had with visitors to the studio last week brought up the current architectural code of using screens over blank buildings to create facades, street front visuals in the tradition of what Venturi called ‘the decorated shed’.

Over the years we’ve developed commissioned screens in a variety of incarnations as roofs and walls. The main function in a permeable screen is to hold the eye by means of some visual or referential device on the screen plane. It doesn’t cover what’s behind it like a curtain, but discovers the site in another way for the eyes, as shapes bathed in a local light.

So to start to deconstruct the Yland, we look, glance and stare at The TAB building, it externalizes its structure, ie the stair and lift well form a tower with ramparts to the central span, all in large mass concrete castings. there’s a clear reference to old castle architecture, also reinforced by its perched site overlooking the creek (moat) like an imperial dynasty gate house. The building functions partly as a sign with concepts of power and associations of history attached while the signage surrounding it: text, stripy graphics, photography in large scale, the branded environment, also trigger culture in the passing brain.

The point we came to was in thinking of the signage as screens and frames, in an interview recently, the artist RH Quaytman says walls can by like pages in a book, movable and able to be cross-referenced.

Billboards are large scale physical planes that block the vista just as roads are cut through it. We’ve started to see the roadway newly spatialized by the collage of signs that play a part in the discontinuity of the Yland environment along with the abrupt and edgy borders between businesses and their uneasy relationship with the creek. 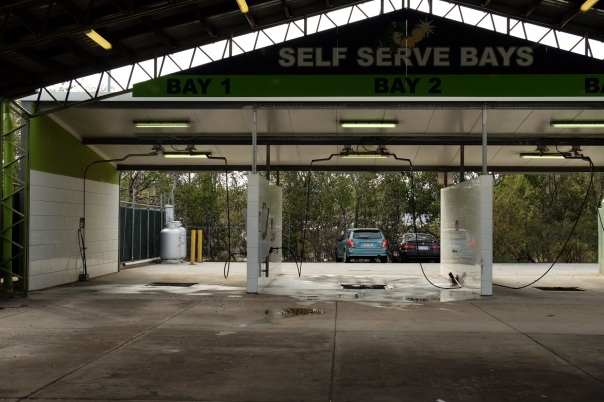